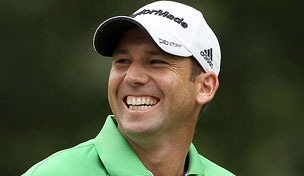 Getty Images
FARMINGDALE, NY - JUNE 22: Ricky Barnes watches his third shot on the fifth hole during the continuation of the final round of the 109th U.S. Open on the Black Course at Bethpage State Park on June 22, 2009 in Farmingdale, New York. (Photo by Andy Lyons/Getty Images)  -

BETHESDA, Md. – Sergio Garcia looked like the El Nino of old Thursday during the first round of the U.S. Open. He struck the ball beautifully for most of the day but his infamous balky putter kept him from going lower.

Garcia shot 2-under 69 and is tied for fourth place, four shots behind leader Rory McIlroy. The round appeared as if it would end well when Garcia made birdie on the 17th hole, but it ended on a sour note when he three-putted the 18th hole after missing a 3-footer for par.

“I played nicely but there were a couple of iffy decisions,” Garcia said. “I’m hitting it well, but I don’t think I’m hitting it great.”

How Garcia follows up his four-birdie, two-bogey round is anyone’s guess. He’s certainly played better than many expected this year, considering he took a sabbatical from golf late last summer. But he also put himself in contention to win on the PGA Tour two weeks ago at the HP Byron Nelson Championship but played terribly and posted a final-round 77. Still he recorded three consecutive top-20 finishes on the PGA Tour before a missed cut last week at the FedEx St. Jude Classic.

“Overall I think it was a nice round to start with,” Garcia said. “There’s still a long way to go. We haven’t done anything yet.”