Garcia rises to No. 17 in world ranking 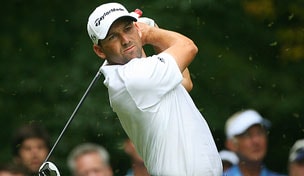 Getty Images
PONTE VEDRA BEACH, FL - MAY 10: Henrik Stenson of Sweden plays his tee shot on the first hole in front of the club house and a gallery of fans during the final round of THE PLAYERS Championship on THE PLAYERS Stadium Course at TPC Sawgrass on May 10, 2009 in Ponte Vedra Beach, Florida. (Photo by Sam Greenwood/Getty Images)  -

Sergio Garcia is back in the winner’s circle on the PGA Tour – and he’s back inside the top 20 in the world ranking, too.

The 32-year-old Spaniard improved a dozen spots in the latest Official World Golf Ranking, to No. 17, after his two-stroke victory Monday in the Wyndham Championship. It’s his highest position in the OWGR since the WGC-Match Play in February.

Tim Clark, who hasn’t finished worse than 15th in his past three Tour starts, checked in at No. 90 after his runner-up finish at Sedgefield Country Club. That’s a drastic improvement for the diminutive South African, who was 240th in the world after missing the cut at the U.S. Open in June.

“It does a lot for me,” Clark said of his recent form. “Having missed a whole year and finally get myself in contention in tournaments, it means a lot to me. It’s a tough game, and I fought hard this year and I’m just glad to be back.”

PGA Tour rookie Bud Cauley, fresh off a solo third at the Wyndham, also made a big jump in the world ranking. He’s now all the way up to No. 64, after beginning the season ranked 249th.