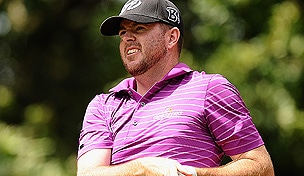 Getty Images
CHARLOTTE, NC - MAY 05: Ian Poulter of England hits his tee shot on the third hole during the first round of the Wells Fargo Championship at Quail Hollow on May 5, 2016 in Charlotte, North Carolina. (Photo by Stacy Revere/Getty Images)  -

PALM HARBOR, Fla. – Robert Garrigus didn’t play a practice round this week at Innisbrook, opting instead to spend his afternoons fishing. In fact, he didn’t even see the course.

That didn’t lead to victory, so already he has a new plan for 2015.

“Next year I’m not going to go fishing,” he said Sunday. “I’m going to bring a damn chainsaw and cut a few trees out.”

Garrigus dropped to 0-4 when holding at least a share of the 54-hole lead, shooting a 4-over 75 in the final round of the Valspar Championship to fall from one shot ahead to three behind winner John Senden. At 4-under 280, Garrigus finished in a tie for fourth, his first top-10 finish since the 2013 Match Play.

In the final round, Garrigus hit only 12 greens and required 33 putts, easily his highest total of the week. He made two double bogeys in the first six holes, but battled back to within a shot of the lead midway through the back nine.