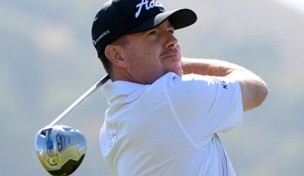 Getty Images
SOUTHAMPTON, BERMUDA - OCTOBER 19: Keegan Bradley of the USA celebrates with his family after the final putt during the second round of the PGA Grand Slam of Golf at the Port Royal Golf Course on October 19, 2011 in Southampton, Bermuda. (Photo by Ross Kinnaird/Getty Images)  -

SAN MARTIN, Calif. – Robert Garrigus made nine birdies and one bogey Friday to shoot 8-under 63 at the Frys.com Open. He stands at 9 under par for the tournament, following his opening 70.

Garrigus shot 6-under 29 on the front side, making birdies on Nos. 1, 3 and 6-9. Six of the front nine holes at CordeValle Golf Club ranked among the top seven toughest in Round 1.

His back nine wasn't quite as fruitful, but he collected three birdies to one bogey. His score was one shy of the tournament course record, but two strokes better than his previous low number this year.

'It was an A-plus day,' he said. 'I missed a couple of short eagle putts. Can't really get mad at that when you made a bunch of par putts.'