Garrigus may go to long putter 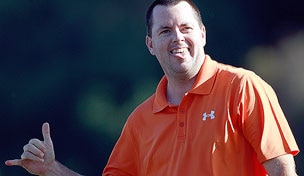 The man who wields the shortest putter on the PGA Tour appears prepared to go in the opposite direction in 2012.

Robert Garrigus has been toying with the idea of switching to a long putter, starting in Hawaii. He tweeted Thursday that the change is almost certain:

'[T]o all my boys on tour I look forward to seeing everyone in palm springs! I am gettin a bit antsy might be hawii! With the long putter;)

'Still in limbo with that but pretty sure it's going to happen needs some more time to get used to it then it on!'

Garrigus has been using a 28 ½-inch putter since he was 19. A custom fitter suggested he use the short stick.

'He gave me this little tiny thing and he's like, 'Here. Get your hands down, shoulders down, and eyes over the ball, and tell me what feels good.' It was 28 inches when I did that,' Garrigus said at the Hyundai Tournament of Champions last January.

'As soon as I got to Q-School, I wasn't missing those short 3- and 4-footers anymore. I was rolling them all in. And I went through the first stage, then the second and got to third when I was like 20 years old. And I just felt like that was a fit for me.'