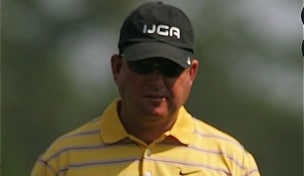 Getty Images
SCOTTSDALE AZ - OCTOBER 25: Cameron Beckman lines up a birdie putt on the par three 16th hole during the third round of the Fry's.Com Open held at Grayhawk Golf Club on October 25, 2008 in Scottsdale, Arizona. (Photo by Marc Feldman/Getty Images)  -

ROCHESTER, N.Y. – Call him The Fixer.

Or after this week, maybe the Golf Muse.

When Morgan Pressel couldn’t work out the bug in the timing of her swing in the first round of the Wegmans LPGA Championship, she warmed up with Gilchrist watching on the driving range.

Pressel hit all 14 fairways in the second round.

After Yani Tseng struggled with a cold putter Friday, she huddled with Gilchrist on the practice putting green.

Tseng’s leading through two rounds and Pressel’s tied for third, two shots back.

Gilchrist is coach to four players among the top 10 going into this weekend.

His students also include Reilley Rankin and Shanshan Feng, both tied for 10th five shots back.

“It’s gratifying watching players perform in a game that’s so difficult and challenging,” said Gilchrist, whose golf academy is based at the Mission Inn Resort & Club in Howey-in-the-Hills, Fla. “It’s exciting.”

How does Gilchrist work out the demands this weekend?

“It isn’t hard, really,” Gilchrist said. “Because I’m not an instructor, I’m more of a coach.”

Gilchrist says instructors focus on technique, but as a coach he coaches the entire player, including the head and heart.

Gilchrist says his work at a tournament site is more about reminding and reinforcing.

“I’m more in a support role when I get here,' he said. 'I’m here more to help with preparation and talk about strategy, if they want that.”