It's a wrap: GC Am Tour national championships 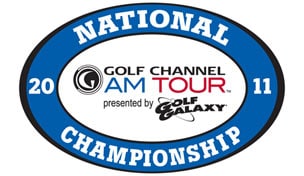 A record field of 1,029 amateurs competed in the 2011 Golf Channel Am Tour (GCAT) National Championships, Sept. 18-27. The event was contested at four La Quinta, Calif., area courses, headlined by the famed Stadium Course at PGA West. Tournament contestants ranged in age from 12 to 79 and represented 42 U.S. states, Puerto Rico and Canada.

Here is a breakdown from all the action.

We are the champions: Just amateurs? Sure. But for the six Golf Channel Am Tour national champions, victory is sweet no matter the stage.

Golf's a kid's game: Charlie Reiter has won so much at golf that he's lost count. He's been winning his whole life. Of course, he's only 12.

Low expectations: Mark Mulder knows what it’s like to be a national champion, having been part of the 2006 World Series-winning St. Louis Cardinals. Now competing at the Golf Channel Amateur Tour National Championships, he says he’s setting the bar low.

Some like it hot: An eclectic group of contestants prepare for this week's Golf Channel Amateur Tour National Championships in Palm Springs. Only those who can take the heat will prevail.

The last laugh: How do you conquer Pete Dye's Stadium Course? In the Hogan flight, all you need is a little help from your friends.

Champion of Champions: Richard Krogness won the Championship flight at the Norman Course at PGA West.

Sippy cup: Won your first Am Tour crown? Why not drink from the crystal? That's what winner Dave Verlhust did.

Kings of the Mountain: Two Am Tour crowns were awarded to those who conquered the La Quinta Resort Mountain Course.

Desert Duel: For one Am Tour veteran, the coveted three-peat is in sight. In his way? A nationals rookie.

Taking on the man: The Am Tour isn't 'men only.' Six women are competing this week in La Quinta, and some are in contention.

Coming up aces: After a quiet opening round, the aces began to drop in Round 2 at PGA West.

Escaping Alcatraz: In Round 1, the Sarazen flight took on the infamous par-3 17th hole on the PGA West Stadium Course.