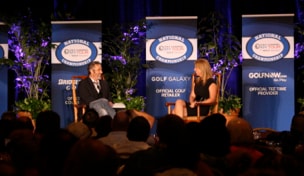 LA QUINTA, Calif. -- If the 'show's not over until the fat lady sings', perhaps it can't begin until David Feherty has told a string of flatulence stories.

Kelly Tilghman and Feherty welcomed the Golf Channel Am Tour National Championships competitors at a welcome dinner by sharing some untold tales from the tour, including a few nuggets from Feherty that are debatably unfit for print.

A little off-color humor that CBS might not approve of is just a little slice of the reward for those nearly 1,200 competitors teeing it up this week. Golfers qualified by placing in the Top 3 of one of the Am Tour's 29 major events since the 2012 National Championships. Now, finalists can get a good night sleep and prepare for round one, which will be staged among four courses at PGA West.

At tonight's welcome dinner, the hosts also took timeout to announce that Am Tour raised $76,534 for the Troops First Foundation in 2013 through 50-50 raffles at local events, surpassing last year's total of just over $64,000. This is also the biggest Nationals field in the event's history since it began in 2004. The Hogan flight (8-11.9 handicaps) will be the most competitive with 142 entrants.

Some players will tee it up at PGA West on the heels of particularly hot seasons.

Paul Nault, from Victoria, B.C., won Nationals last year in the Snead division (20 handicaps and above) but now finds himself bumped up two flights to the Sarazen flight (12-15.9). His 2013 season thus far, which includes four victories on his local tour plus two third place finishes in majors, is highlighted by a 74 at Druids Glen Golf Club near Seattle.

There are some players in the event who already have some good memories about PGA West, which hosted the Western Classic, a two-day major earlier this year. Sanjay Prasanna won the Jones flight (16-19.9 handicaps) with a two-day total of 170. That said, he will have to face down the infamous Alcatraz hole on the Stadium Course again, which bit him for a six during the event.

New for 2013: The Palmer Private Course at PGA West.

While La Quinta was the site of the 2011 National Championships, 2013 brings two new golf courses to the lineup. Joining the side-by-side Nicklaus and Stadium Course at PGA West as well as the Greg Norman Course is the Palmer Private Course at PGA West, which is in the course rotation for the Humana Challenge on the PGA TOUR.