Golfer flipped the bird ... at himself 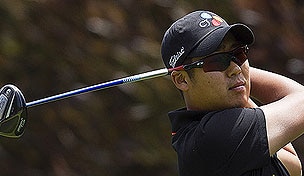 BETHESDA, Md. – Following a wayward approach shot on the 12th hole during Saturday’s third round at the AT&T National, D.H. Lee was caught by television cameras gesturing with his middle finger in an apparent expression toward the nearby gallery.

After the round, though, Lee contended that the gesture was meant for himself rather than anyone behind the ropes.

“I’m sorry for that,” said the 25-year-old South Korean. “No, it was just for me. My ball. It was frustration. It wasn’t aimed at anyone.”

Lee carded a bogey on the 12th hole, one of six over-par numbers in a 4-over 75 that dropped him from a share of fourth place to T-20 entering the final day.