'Good' play not enough for runner-up DJ once again 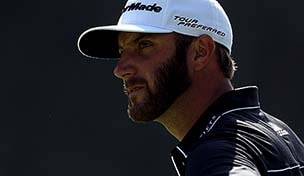 Getty Images
"Totally gutted I had to WD from our national championship. Thanks for all the kind words. Hopefully just a short recovery. #OhCanada" - on withdrawing from the Canadian Open with a hand injury  -

With a 5-under-par 66 Sunday at the Northern Trust Open, Johnson was the leader in the clubhouse at Riviera Country with Bubba Watson still on the course trying to close out a victory.

With Watson taking a one-shot lead to the 18th tee, Johnson waited, knowing a bogey would get him into a playoff. Watson, however, birdied the last.

A week ago, Johnson closed another Sunday strong at Pebble Beach, where he waited and watched Jimmy Walker hold on to beat him by a shot.

Johnson didn’t make a bogey on Sunday at Riviera, but neither did Watson, who closed with a pair of weekend 64s.

“When you shoot 14 under on a weekend, that’s tough to beat,” Johnson said.

In four starts this wraparound season, Johnson has one victory, two second-place finishes and a tie for sixth.