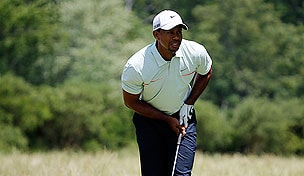 WHITE SULPHUR SPRINGS, W.Va. – Now it can be told: Tiger Woods originally intended on competing once again in this week's Greenbrier Classic.

According to tournament officials, Woods was set to make his second consecutive start in this tournament before he took a brief leave of absence because of an elbow injury.

Woods maintains that he first injured his left elbow while winning The Players Championship in May, then re-aggravated it two weeks later at The Memorial Tournament. At last month's U.S. Open, he showed visible signs of pain, finishing in a share of 32nd place. Just a few days later, he announced that he wouldn't compete again until the Open Championship, missing his own AT&T National and – as we've now learned – The Greenbrier Classic.

“There's a difference between being hurt and being injured,” he explained last week. “It's a delicate balance. I know what it's like to play both, unfortunately. You can play hurt, but playing injured, it can sideline you for a while. I've gone through that. I've tried to come back when I was still injured, and I've cost myself a number of months where I haven't been able to compete and play out here and do the thing I love to do, which is play against these guys out here.”

Last year, he posted scores of 71-69 and missed the cut in his first Greenbrier appearance.

Woods is expected to return at Muirfield for the year's third major championship in two weeks.