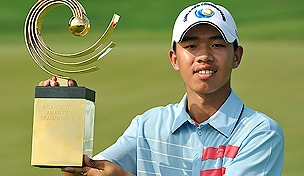 Chinese teen sensation Tianlang Guan made history Sunday by capturing the Asia-Pacific Amateur Championship and an invitation to the Masters in the process.

Guan, 14, fired a 1-under 71 Sunday at Amata Spring Country Club in Chonburi, Thailand, to finish the event at 15-under 273 and hang on for a one-stroke victory. The youngest player in this week's field, Guan completed a wire-to-wire victory and will become the youngest competitor in the history of The Masters.

Guan will be 14 years, five months and 17 days when he tees it up at Augusta National next April. The previous record was established by Matteo Manassero in 2010, when the 16-year-old earned an invitation after winning the British Amateur Championship in 2009.

'I'm excited. I'm really happy to become the youngest player at the Masters and look forward to going there,' Guan said after the round. 'I don't know what's going to happen there, but I know I just want to do well.'

Guan began the day with a two-stroke lead and saw his advantage balloon to five during Sunday's final round. Once Pan Cheng-tsung of Chinese Taipei, the No. 2 amateur in Asia, closed with a 7-under 65, Guan's lead was trimmed to one shot as he played the final hole. After his chip rolled five feet past the hole, Guan calmly holed his par putt for the historic win.

Both Guan and Cheng-tsung will also receive a spot in International Final Qualifying for the 2013 British Open.

Australian teen Oliver Goss, who entered the final round in second place, finished in third at 12-under, three shots behind Guan. Two-time defending champion Hideki Matsuyama, Asia's top-ranked amateur, closed with a 4-under 68 to finish fourth at 10 under.