Guan (68) in contention at Asia-Pacific Amateur 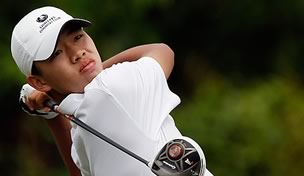 Displaying some of the form that earned him the title a year ago, 15-year-old Guan Tianlang fired a 3-under 68 Saturday to move into a tie for fifth heading into the final round of the Asia-Pacific Amateur.

Beginning the day six shots off the pace, Guan started quickly at Nanshan International Golf Club, carding five birdies across his outward nine. At 3-over 216, the event's defending champion sits five shots behind leader Lee Chang-woo with 18 holes remaining as some of the continent's best amateurs vie for a trip down Magnolia Lane.

'I think I had a great round today. I gave myself a lot of opportunities and made a lot of birdies on the front (nine),' Guan said according to a tournament release. 'I really think my feel is coming back and I will try and get some more birdies tomorrow.'

Held in conjunction with the R&A and Augusta National Golf Club, the Asia-Pacific Amateur offers an invitation to The Masters to the winner of the 72-hole event, while the winner and runner(s)-up will earn spots in International Final Qualifying for the 2014 British Open.

Beginning the day with a share of the lead, Lee moved ahead of the field with a 2-under 69 Saturday that included three birdies against just one bogey. At 2-under 211, he leads by one shot over 16-year-old Dou Zecheng, who led after the first round and made the cut earlier this year at the China Open on the European Tour.

Second-round co-leader Shohei Hasegawa sits alone in third place, two shots off the pace after an even-par 71, while fellow countryman Kenta Konishi is in fourth place, four off the pace following a 3-under 68. While Guan trimmed his overall deficit by only one shot, there are now only four golfers ahead of him on the leaderboard as he is joined in fifth place by Oliver Goss, who already has a spot in the field at Augusta National next spring by virtue of making the finals of the U.S. Amateur earlier this year.