Guan to play Tiger, Rory in skills challenge in China 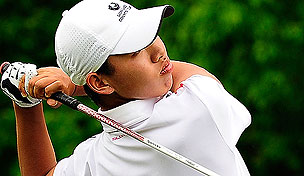 No stranger to big stages, Tianlang Guan will find himself on another one next month in China.

Tournament organizers announced Monday that the 14-year-old prodigy will compete against Tiger Woods and Rory McIlroy in a short skills challenge before the two pros compete in what has been dubbed The Match at Mission Hills, scheduled for Oct. 28.

The skills challenge calls for the three players to hit balls at three targets – 50, 100 and 125 yards. Woods and McIlroy will also host a clinic for Guan and the rest of the Chinese national team.

“I might have a chance because these are short targets,” Guan said in a release. “I’m glad it’s not a long-driving contest.”

Guan played a nine-hole practice round with Woods at this year’s Masters, where the teen later went on to become the youngest player to make the cut.

“The skills challenge with Guan should be fun,” Woods said. “I’m really excited about his future and what he’s doing for the profile of golf in China, so it’s great he’ll be a part of The Match at Mission Hills. I know we’ll have a lot of junior golfers watching us that day, and it’s great that this has been added into the mix.”