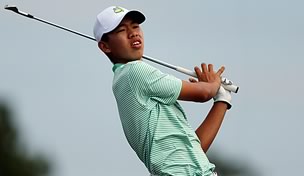 The most talked about teen not named Lydia Ko gets back to work next week when Guan Tianlang defends his title at the Asia-Pacific Amateur Championship, a milestone victory that earned him an invitation to the 2013 Masters and a whirlwind summer on the PGA Tour.

Guan, who finished 58th at the Masters and went 2-for-5 in cuts made on the Tour last season, said in a conference call on Tuesday that he returned home to China stronger and wiser.

“After winning the Asian-Pacific Amateur last year and playing the Masters it gives me more confidence for myself and I can know how the Tour and the Masters runs. I am more confident. I learned so much,” said Guan, who became the youngest player to participate in the Masters and to make a cut on the Tour.

Guan’s week at Augusta National was marred by a slow play penalty on Thursday that cost him a stroke and nearly a weekend tee time at the year’s first major. But even that polarizing ruling didn’t spoil his historic start.

“I respect what they did with me. I respect the referee. It was a really good experience for me, I learned from that and (now) pay more attention to it,” said Guan, who turns 15 next Friday. “I think I should thank (the rules official) for it.”

Guan – who also made the cut in New Orleans but failed to advance to the weekend at the Byron Nelson Championship, Memorial and Fedex St. Jude Classic – said his celebrity status in China helped expose the game to more people in his native country, particularly among juniors.

After the Asian-Pacific Amateur, Guan said he plans to play a charity event in Shanghai in November and is hoping to receive a sponsor exemption into the WGC-HSBC Champions at the end of this month.

Guan also said he has no immediate plans to turn professional and that he traded in his belly putter for a traditional-length model.

“I am back to a normal-length putter. I didn’t think it was that much different. I changed back a month ago,” he said.