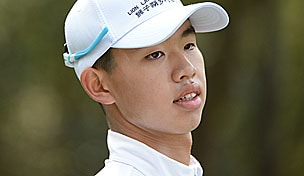 With winds whipping at Nanshan International Golf Club, defending champion Guan Tianlang carded a second consecutive round of 3-over 74 to sit six shots off the pace at the halfway point of the Asia-Pacific Amateur.

Guan, who turned 15 Friday, notched one birdie against two bogeys and a double bogey during the second round in Longkou City, China. At 6-over 148, the teen is tied for 17th after 36 holes as he looks to earn a return trip to The Masters.

Pacing the field through two rounds are Japan's Shohei Hasegawa and Lee Chang-woo from South Korea, who both head into the weekend at even-par 142. Hasegawa was one of only three players to break par during the second round, carding a 1-under 70, while Lee appeared poised to take sole possession of the lead into the third round before a pair of closing bogeys left him tied with Hasegawa following a 1-over 72.

The co-leaders hold a slim one-shot advantage over three players, including China's Dou Zecheng, who fired a 4-over 75 after holding the overnight lead. Dou, who made the cut earlier this year at the China Open, is the only player from this year's host country within five shots of the lead.

A pair of notable Australians remain within striking distance after two rounds, as Oliver Goss and Brady Watt are both tied for seventh, three shots off the pace. Goss, who plays collegiately for the University of Tennessee, was a finalist at the U.S. Amateur earlier this year, while Watt advanced to the semifinals at The Country Club before losing to Goss. Joining the pair of Aussies at 3-over 145 is Pan Cheng-tsung, who finished second to Guan in this event a year ago.

Held in conjunction with both the R&A and Augusta National Golf Club, the Asia-Pacific Amateur offers an invitation to the Masters for the winner of the 72-hole event. Additionally, both the winner and runner(s)-up will receive spots in International Final Qualifying for the 2014 British Open.