Guan six back of early leader Dou at Asia-Pacific Am 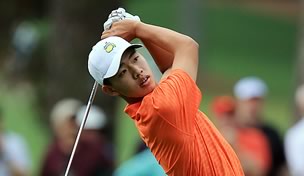 A Chinese prodigy – no, not Guan Tianlang – is atop the leaderboard after Round 1 of the Asia Pacific-Amateur.

Dou Zecheng, the 16-year-old who made the cut at this year’s China Open, shot a 3-under 68 in difficult conditions Thursday to take a two-shot lead at Nanshan International Golf Club in Longkou City, China.

The winner of the four-round event receives an invitation to the Masters and a spot in International Final Qualifying for the British Open.

The first round proved more challenging for last year’s winner, Guan, who signed for a 3-over 74.

“I felt like I played OK,” he said in a tournament release. “I missed a few chances but overall I’m quite happy. I have the confidence to go out and shoot a better score (Friday).”