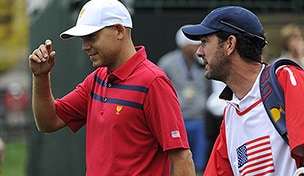 Getty Images
While on an outdoor photo shoot, Derek Bohlen takes in the offerings of Big Break Greenbrier.  -

DUBLIN, Ohio – He may not get as much pub as Tiger Woods or Phil Mickelson or even Steve Stricker, but Bill Haas is among the most consistent performers on the United States roster – and he’s showing it this week.

Already with a 1-1-1 record and holding a 2-up lead through 10 holes in his suspended foursomes match with Stricker against Adam Scott and Hideki Matsuyama, Haas has not only been raining birdies, but he’s served as the team’s most interchangeable player.

Haas is the only team member to compete with three different partners this week, playing alongside Hunter Mahan and Webb Simpson prior to his match with Stricker.

U.S. captain Fred Couples likes what he’s seen from him all week.

“He's played really well,” Couples said. “We haven't really bounced around any teams, which I'm not going to lie to you, seems very boring, not in a golf way, but in a way for everyone to kind of play the same. And we bumped Bill to play with Stricker when we rested Jordan [Spieth], and they are playing very well together. I think they are in the middle of the 11th fairway, 2 up. And that's what you need.”

Haas has already matched his point total of two years ago, when he posted a 1-3-1 record in his Presidents Cup debut.