Hadley, Koepka among those near Masters bubble 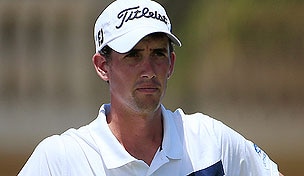 Getty Images
HUMBLE, TX - APRIL 02: Charley Hoffman of the United States hits his tee shot on the fifth hole during the third round of the Shell Houston Open at the Golf Club of Houston on April 2, 2016 in Humble, Texas. (Photo by Scott Halleran/Getty Images)
-

With the season's first major fast approaching, a number of players in this week's field at the Valspar Championship may keep an eye on the various permutations and projections of the Official World Golf Rankings as play gets underway in Tampa.

That's because there remain only two ways to earn a berth in the field at the Masters: win one of the four remaining PGA Tour events, or crack the top 50 in the world rankings when they are published March 31 following the Valero Texas Open.

While many of the game's biggest names are skipping this week to rest following the season's third WGC event, a number of players still without a Masters invite could move inside the top 50 with a strong showing at Innisbrook. Chief among that group is Chesson Hadley, who just last week captured his first career PGA Tour victory at the Puerto Rico Open.

While Hadley's win at Trump International earned him a two-year exemption and a trip to Maui next January, the 26-year-old did not punch a ticket to Augusta National in the process since the tournament did not offer a full allocation of FedEx Cup points. As a result, he's the only PGA Tour winner from the 2013-14 season not currently eligible for the year's first major, and will tee it up this week at No. 63 in the latest rankings.

Two other players that could make a move toward the top 50 with a high finish this week on the Copperhead Course are South Florida roommates, Brooks Koepka (No. 70) and Peter Uihlein (No. 73). Like Hadley, Koepka played last week in Puerto Rico, where he tied for 19th, while Uihlein finished T-25 at the WGC-Cadillac Championship in Miami.

Charles Howell III - a native of Augusta, Ga. - begins this week at No. 76. Howell already has five top-10 finishes to his credit this season as he looks to play in front of his hometown fans at the Masters for just the second time since 2008.

As defending champion Kevin Streelman can attest, a strong showing at this event can translate into a big rise in the rankings. Following his two-shot triumph in Tampa last year, Streelman jumped from No. 205 to 74th, and this week returns to Innisbrook as the 43rd-ranked player in the world.