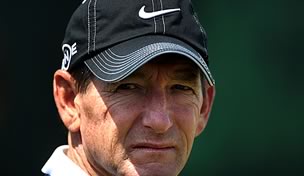 OK, besides the entire population of Tiger Nation, and then some.

'How can you pick anybody but Tiger Woods in the U.S. Open?' Haney told Reuters in a telephone interview on Friday.

Woods' former swing coach, estranged from the world's No. 1 golfer after writing an unauthorized book, 'The Big Miss,' said Woods' putting will be the key.

'The rest of his game is right there,' Haney said. 'His ball striking is down a little bit. (But) the most important thing is putting. You can swing it all you want, you can strike it all you want. But you better putt.

'But Merion is going to take the driver out of everybody's hands on certain holes and that has to be an advantage to Tiger.'

'The intimidation factor is creeping back in for sure. Especially when he gets on the lead. There's nobody that can close like Tiger Woods. Everybody knows that.'

Even though Woods hasn't won a major in five years, Haney isn't exactly going out on a limb here. The online sports book Bovada lists Woods as a 7-2 favorite to win at Merion. Rory McIlroy was next at 16-1.