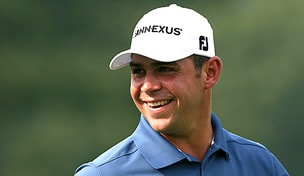 Woodland – who split with Smith following his departure from Hambric Sports Management where he was represented by Smith’s son, Blake – said last week at the season opener that he had “some people in mind” to replace Smith, but on Tuesday the Harmon era got underway with an intense session.

Harmon told GolfChannel.com on Tuesday that Woodland called “a couple weeks ago” about the possibility of working together.

“He is a special athlete and a great kid,” Harmon said. “My theory is to never take away from what they do naturally.”

What Woodland does naturally is hit the golf ball vast distances. Last year he was fifth on Tour with a 310-yard average and is a frequent playing partner of Dustin Johnson, another bomber and Harmon student.

“I wanted to keep it simple and Butch is as simple as it gets. He’s one of the best in the world at what he does,” Woodland said following his first session with the renowned coach. “We just want to find a way to be more consistent and understand why I miss it in a certain direction.”

Woodland said his work with Harmon will focus on his driving, which has produced wild misses to the right particularly at Kapalua where left-to-right winds exaggerated the problem.

Unlike with Phil Mickelson, who famously abbreviated his backswing when he started working with Harmon in 2007, Woodland said Harmon wants him to be “more solid and slow down the transition.”

Woodland said he plans to stay in Las Vegas for a few days and plans to pick up his season later this month at the Farmers Insurance Open followed by the Waste Management Phoenix Open, Northern Trust Open and WGC-Match Play Championship.