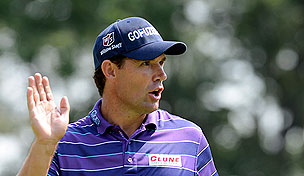 Few expected Padraig Harrington to receive one of Jose Maria Olazabal’s captain’s picks when the announcement was made Monday.

The Irishman, who has played on every European Ryder Cup team since 1999, told the Irish Golf Desk on Monday night that “the dogs in the street knew I wasn’t getting a pick, so it wasn’t a hard phone call whatsoever.

“It was a polite phone call from Jose. I knew the result. Obviously it wasn’t news to me. I was quite comfortable with his two picks. I think they’ll do very well.”

Harrington, who turns 42 on Friday, said that, “My 2014 campaign starts next year, and I know I am going to play plenty more Ryder Cups. I feel like I am playing great golf and everything is really going forward.”

Olazabal and Harrington had an oft-discussed spat at the 2003 Seve Trophy – when the Dubliner questioned Olazabal about a repaired pitch mark – but the captain downplayed the rift and said it wouldn’t affect his decision.

On Monday, after announcing his two wildcard selections, Olazabal said of Harrington, “I talked to him (Sunday) night, and I was very straight and to the point. I know he tried hard, but he was 19th on the list. I know he’s a great player, and I would have loved to have him on the team, but you need to be playing good. Simple as that.”

By way of comparison, Poulter and Colsaerts were 11th and 12th on the World Points list, respectively. Thus, the relatively straightforward decision.

“It was a very obvious selection, so there’s no questions or issues or anything like that about it.”