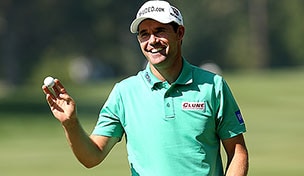 Making the most of his opportunity as a late addition to the field, Padraig Harrington won the PGA Grand Slam of Golf by a single shot Wednesday over Webb Simpson.

Added to the field over the weekend when British Open champion Ernie Els withdrew with an ankle injury, the Irishman fired a 4-under 67 to finish 36 holes at the Port Royal Golf Course at 9 under. This was Harrington's first appearance in Bermuda since 2008, when he lost in a playoff to Jim Furyk.

Simpson carded a bogey-free, 6-under 65 Wednesday – the best round of the tournament – to finish at 8 under, one stroke behind Harrington. The U.S. Open champion put some pressure on the leader early in the round, going out in 4-under 32 to draw within a shot of the lead. Harrington regained control, though, with three consecutive birdies on holes 11-13 as Simpson was only able to manufacture a pair of birdies on the inward nine.

Masters winner Bubba Watson shot an even-par 71 to finish in a share of third place, six shots behind Harrington. Like Simpson, Watson got to within a shot of the Irishman after a birdie on the 10th hole, but that turned out to be the final birdie of his round and a double bogey on the 16th hole dropped the southpaw out of contention.

Defending Grand Slam champion Keegan Bradley finished alongside Watson, six strokes behind Harrington after a 4-under 67 on Wednesday. Named as a replacement for PGA champion Rory McIlroy, Bradley struggled to overcome the deficit created by Tuesday's opening round, but did provide one of the day's best highlights with an eagle on the 393-yard, par-4 14th hole.