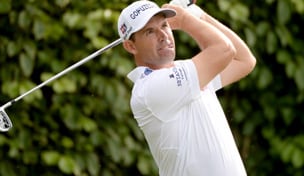 Getty Images
PONTE VEDRA BEACH, FL - MAY 13: Kevin Na of the United States hits his tee shot on the third hole during the final round of THE PLAYERS Championship held at THE PLAYERS Stadium course at TPC Sawgrass on May 13, 2012 in Ponte Vedra Beach, Florida. (Photo by David Cannon/Getty Images)  -

Padraig Harrington, winless in the majors since 2008, shot 74 Tuesday and is seven shots off the lead at the PGA Grand Slam of Golf, where he is the defending champion at the tournament reserved for the year’s major winners.

Anyway, this isn’t the 2008 Harrington. That much has been made clear in the latest world rankings. This week, for the first time in more than 14 years, he dropped outside the top 100 in the world. He is now ranked 101st.

“I have to figure out a different way of playing with who Padraig Harrington is now than necessarily who I was over the years,” he said earlier this week in Bermuda. “I’m a different person and I have a different attitude to the game at this stage. There’s no point in trying to go back and be the guy I was five years ago before I won majors. …

“For years, I would have been searching for it and trying to find it. Now I pretty much understand everything I need to know about my game. But it’s hard to get the most out of it on any given day. My short game is not as good as it used to be, and most of that is because of intensity.”