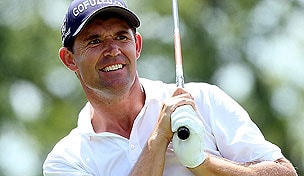 "I've had a number of skin cancers removed from my face," Harrington told an Irish radio program. "When you get a symptom, don't ignore it. Do something about it."

The Irishman hasn't won since claiming the 2008 PGA Championship at Oakland Hills, but has remained a fixture on both the PGA and European tours. He played each of the last three weeks during the West Coast swing, missing the cut twice and posting a T-27 finish at Pebble Beach.

The health scare strikes especially close to home for Harrington, who lost his father to esophageal cancer in 2005. The 42-year-old has since become a spokesperson for the Oesophageal Cancer Fund of Ireland.

"My father had symptoms but didn't do anything about it. It's the nature of men in Ireland, and certainly older men," said Harrington. "If I get a pain, I go and get it checked out. It's a little bit of a hardship (going to the doctor) but you will feel much better afterwards."

Harrington remains in the published field for next week's Honda Classic, where he won his first career PGA Tour title in 2005.