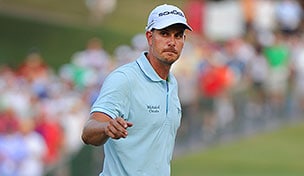 Getty Images
James Lepp thought he made this putt, and was shocked when his ball stayed out of the hole.  -

ATLANTA – Henrik Stenson has pulled off the PGA Tour equivalent of a college football team routing Alabama and Oregon on back-to-back weeks.

The current Tour Championship leader has played three rounds at East Lake Golf Club so far this week. That includes one round with world No. 1-ranked player Tiger Woods and two rounds with No. 2 Adam Scott.

Stenson has posted scores of 64-66-69 in the opening three rounds, bettering his two top-ranked playing partners by a combined 17 strokes over 54 holes. Woods posted a 73 in the first round; Scott posted a 69 and 74 in the second and third rounds, respectively.

Stenson not only leads the tournament by four strokes, but is safely ahead in the projected FedEx Cup standings, as well.