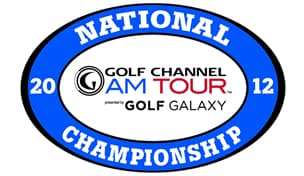 PONTE VEDRA BEACH, Fla. – Mike Healy almost withdrew from the Am Tour Championships, but his son Dylan convinced him otherwise. It turned out to be a good decision. Not only did Healy win a national championship in his first attempt, but his son had a great week, too.

Healy, who plays out of the Vanderbilt Legends Club in Franklin, Tenn., won the Palmer flight by nine shots after his second consecutive 74, this one on the Lagoons Course. Healy fired a four-day total of 307, 21 over par, to best Michael Stephanik of Monroe, N.J.

As it turned out, Dylan was also playing in his very first collegiate tournament as a freshman at the University of Arizona. The tournament, at Washington State, was added to the schedule late, after Mike Healy had already signed up for the Am Tour Championships.

'I've been a golf dad for almost 10 years,' said Healy, who played in his very first Am Tour national this week. 'I was going to withdraw but it came after the deadline to get my money back, and he encouraged me to play.'

Dylan wound up finishing second in his tournament.

'I'm sad I missed him playing, but he's very happy for me,' Healy said, 'and I'm going to see him play in a couple of weeks.'

Healy got off to a fast start on Thursday by making a long putt for birdie and chipping in for another on his way to a front-nine 34.

'That kind of jump-started my whole round,' Healy said. 'Then the rain came and I really just tried to play conservative and stay in fairways and not do anything bad. I just played consistent all week. I just didn't make any really big numbers and I think that was the difference for me.'

Jacob Morton of Fort Hood, Texas, and Kevin Hawkins of Port Orange, Fla., tied for third at 316. Morton made the biggest jump by shooting the low round of the day, 68, to move up from a tie for 15th place after three rounds.