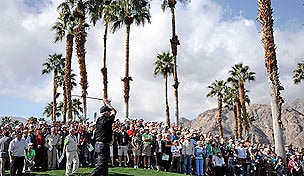 Play was suspended at the Humana Challenge on Saturday, due to high winds at the La Quinta and Nicklaus Private courses. In fairness to the field, play was also halted at the Palmer Private course.

Weather forecasts call for high winds all day and a high-wind warning was issuedfor the La Quinta area until 10 p.m. local time.

After nearly two hours of suspended play, PGA Tour officials decided to scrap play for the day and resume the third round Sunday morning.

Perhaps most affected by the stoppage was Robert Garrigus, who was charging hard at the Nicklaus Private course. He is 9 under through 13holes in his third round, where he moved up into a share of third place at 16-under-par.

It's quite a turnaround for the long-hitting Garrigus, who started the tournament 6 over for his first eight holes on Thursday.