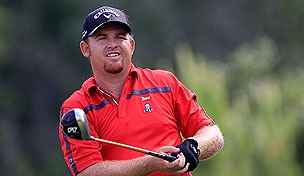 Getty Images
THOUSAND OAKS, CA - DECEMBER 06: Lee Westwood of England and Padraig Harrington on the fourth hole during the fourth round of the Chevron World Challenge at Sherwood Country Club on December 6, 2009 in Thousand Oaks, California. (Photo by Harry How/Getty Images)  -

J.B. Holmes has withdrawn from this week's Franklin Templeton Shootout as he continues to recover from brain surgery.

“It is with great disappointment that I have elected to withdraw from this year’s Franklin Templeton Shootout,” Holmes said in a release. “While I continue to make great strides in my recovery from surgery for Chiari Malformation, I am not 100% and I think it would be a disservice to my partner, Kenny Perry, and the entire Franklin Templeton Shootout organization for me to play at less than full capacity.'

Holmes had surgery Sept. 1 in Baltimore to relieve pressure on the cerebellum and brain stem that had been causing vertigo-like symptoms. The two-time Phoenix Open winner had expected to be able to return in time for the two-man event.

Scott Stallings, winner of the Greenbrier Classic in July and friend of Kenny Perry, will take Holmes' place in the field.