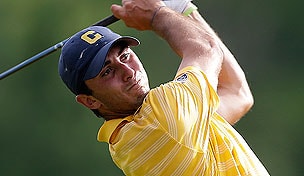 SAN MARTIN, Calif. – Pay that man his money. Max Homa earned $135,000 in his professional debut at the Frys.com Open.

Homa shot four rounds in the 60s at CordeValle Golf Club, culminating with a 2-under 69, to tie for ninth.

The 22-year-old NCAA individual champion from UC Berkeley was taking next week off before competing in the first stage of Web.com Tour qualifying at Pinewild Country Club in Pinehurst, N.C.

Those plans changed with the top-10 finish. He's now in the field for the Shriners Hospitals Open in Las Vegas.

“I don’t think it gets much better,” Homa said. “Shy of winning this was pretty awesome, and I think I got into next week, which was almost better than making money at this point, so I’m thrilled.”

On another debut front, Justin Thomas, the former NCAA Player of the Year from Alabama, got through the 36-hole cut but not the 54-hole version, which was made to trim the Sunday field. He collected $9,600.

Neither Thomas nor Homa have status on any tour. They both competed this week on a sponsor exemption. Jordan Spieth was in a similar situation this past season and became a PGA Tour winner and U.S. Presidents Cup team member.

“It gives people like me a lot of confidence going into a year,” Thomas said earlier in the week of Spieth's accomplishment. “But I'm not trying to have too many certain expectations. I just want to come into all my events and just play the best that I can and most importantly just have a place to play this year.”