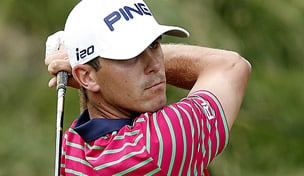 SAN MARTIN, Calif. – All work and no play makes Billy a burned-out boy.

Billy Horschel said Wednesday that his late-season swoon in 2013 was the result of too much golf and not enough me time.

“I just didn’t take enough time off away from the game when I was home,” Horschel said. “I was practicing too much when I was home and I should have been resting a little more.”

In his first 16 events last season, Horschel had a win (Zurich Classic) and three other top-five finishes. In his final 10 starts, however, he had one top-10, that coming in the Tour Championship season finale.

“It’s a learning process, and what I learned was if I play four events out of six weeks, or seven events out of nine,” Horschel explained, “I need to literally get away from the game and not touch a club for five or six days – which is tough, because I feel like I’m losing something.”

Following his T-7 at East Lake, Horschel said he relaxed, overseeing some house renovations (from the couch), taking some naps and watching his Florida Gators play.

“I feel rested. I feel good,” Horschel said. “Game is in good shape.”

And he’s going to test it. Horschel plans to stay busy over the final few months of the year, competing in the Malaysia and China PGA Tour stops as well as the Franklin Templeton Shootout.

“I played a lot already this year,” said Horschel, who competed in 26 official Tour events in 2013, “so just decided it was sort of pointless to take the rest of the year off. There are some opportunities I’m going to take advantage of.”