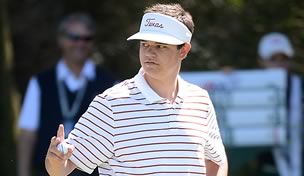 Getty Images
EAST LONDON, SOUTH AFRICA - JANUARY 07: Sam Hutsby of England plays his tee shot on the 11th hole during the first round of the Africa Open at the East London Golf Club on January 7, 2010 in East London, South Africa. (Photo by Stuart Franklin/Getty Images)  -

The 18-year-old, who splashed onto the national scene at the 2012 U.S. Open, enrolled early with the Longhorns but decided to defer his eligibility clock until this fall.

Hossler said that the semester in Austin – when he was allowed to work out and practice with the team but not compete – made the transition to college much easier, and it gave him a head-start on his coursework as he pursues a business degree.

“I almost feel like I’m a veteran,” Hossler said Monday, “even though I’m technically just a freshman.”

Last fall, Jordan Spieth announced that he was turning pro early. In June, after the NCAAs, Brandon Stone also declared that he was joining the play-for-pay ranks after earning the Phil Mickelson Award as the nation’s top freshman.

Then, in the summer, junior Kramer Hickok tore a ligament in his right wrist while hitting out of the rough at the U.S. Amateur. He’s been sidelined all spring, leaving Hossler, along with fellow freshman Gavin Hill, as two of the unlikely leaders on a team that many figured would contend for its second national title in three years.

Hossler has a pair of top-15 finishes in three falls starts, while Hall has been 23rd or better in each tournament. They are T-14 and T-71, respectively, here at Isleworth as the Longhorns are currently tied for ninth in the 15-team race.

“They’ve had to deal with some adversity,” said Longhorns coach John Fields. “They had a vision of how it was going to be, and all of a sudden, reality dictates that there’s really no room for error right now.

“The preferable way would be a little more relaxed, and just allow them to spread their wings and play. But adversity is going to be good for them. They’re getting a little taste of sand kicked in their face, but they’ll come back strong.”