Pick a number: How many wins for Woods? 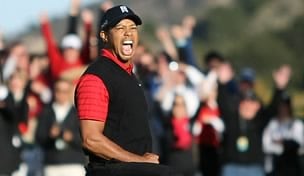 It's been more than two years since Tiger Woods won an official event (Australian Masters, November 2009), but he took a step in the right direction last month by winning the silly-season, 18-man event, the Chevron World Challenge.

So, how will Woods fare in 2012? We set the over/under at 2.5 wins and asked Jason Sobel, Rex Hoggard and Jay Coffin to weigh in. We'll get an early look at Woods' 2012 form when he tees off in the Abu Dhabi HSBC Championship, which begins Jan. 26.

Seven players tied for the most PGA Tour victories in 2011 with a grand total of two. Tiger Woods wasn’t one of 'em – in fact, he wasn’t even one of the 28 players who posted one victory. No, Woods’ lone win came at the 18-man Chevron World Challenge money-grab after the season was already over.

And now we’re being asked how many titles Woods will claim this season with the over/under being set at … 2.5?!?!

That sounds crazy. About as crazy as me taking the over, which I’m doing right now.

I’ve written many times that I don’t think there has been or will be a turning point in which Woods is “back,” reverting to the player who claimed 71 PGA Tour titles and 14 major championships. This is a gradual process – yup, there’s that word again – and it certainly seems like it’s moving in the right direction.

I don’t believe we’ll see another 2000-like season – when Woods won nine times and took three majors – anytime soon (read: ever), but a trio of victories is well within range. In fact, that’s the exact number I believe he will reach this season – one-half beyond that over/under number.

That could mean very big things, too. Three wins used to be a below-average year for Tiger. Now it could very well equate to a Player of the Year honor.

We’ll take the over, but not by much and not at a major. That’s the nature of prognostication, it’s impossible to imagine Tiger Woods going a third year without an official PGA Tour victory but as the man himself pointed out at Sherwood Country Club last month winning is not easy.

He just made it look that way for the better part of a decade and is starting to show signs of life after two years adrift in injury and drought. He won the Chevron World Challenge in a shootout, controlled his golf ball in the wind at the Australian Open and Presidents Cup and gave himself more than a month to prepare for 2012.

New stops at Abu Dhabi and possibly PGA National (Honda Classic), as well as Pebble Beach, which he hasn’t played since 2002, will stoke his competitive fires not to mention he seems poised to play his first full schedule for just the second time since 2007.

As for major No. 15 that’s a different tale. He’s now played 10 Grand Slam events without a victory, matching the longest stretch of his career and other than Augusta National, where he’s finished tied for fourth the last two years, his best finish at this year’s major venues is a T-18 at the 1998 U.S. Open at The Olympic Club.

He may not get off the major schneid, but progress seems inevitable.

Two-and-a-half seems to be the perfect number. Consensus seems to be that Tiger Woods will win either two or three events. Haven’t heard anyone say it’ll be four or more. So I’ll take the under; two sounds about right.

Sure, Woods looked strong in his Chevron World Challenge victory – where there were shades of Old Tiger down the stretch with consecutive birdies to close – but that doesn’t necessarily mean that the floodgates have opened. It was a limited field and many of the men there showed up to collect the guaranteed check, which more than paid for all Christmas gifts three weeks later.

The success of Woods’ season will depend on momentum. The sooner he wins, the better the year will be. If he wins once before the Masters it’d be foolish to think he won’t win another two or three times. If he doesn’t win before the first week in April, he could press, try to make things happen, which could lead to poorer results.

It’s obvious that golf is better when Tiger Woods is winning. But the years of him winning a handful of times, including multiple majors, have passed. This is a year where he wins his first PGA Tour event since 2009 and it’s one where he will make noise just about everywhere he goes. But it’ll end with only two victories.