Hull, 17, breaks through in Morocco with LET win 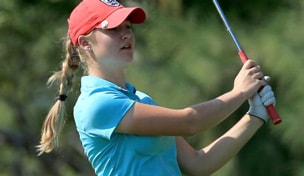 Getty Images
Laura Davies of England waits with her caddie on the 3rd hole during the second round of the Ricoh Women's British Open at Royal Birkdale on July 11, 2014 in Southport, England. (Photo by David Cannon/Getty Images)  -

Chalk up another victory for a teen phenom in the women's pro ranks.

England’s Charley Hull, 17, broke through to win her first professional title in dramatic fashion Sunday, shooting a career-best 9-under-par 62 to come from five shots back in the final round and win in a playoff at the Lalla Meryem Cup in Morocco on the Ladies European Tour.

Hull, who turns 18 on Thursday, defeated France’s Gwladys Nocera with a birdie at the first playoff hole. Hull joins Lydia Ko, Lexi Thompson and Ariya Jutanugarn as players winning LET or LPGA titles before their 18th birthday over the last three seasons. Minjee Lee won the Victorian Open as a 17-year-old on the Australian LPGA Tour last month.

Hull made her LET debut as a professional at the Lalla Meryem Cup in Morocco a year ago, finishing second, the first of five runner-up finishes in her rookie season. Jutanugarn was also 17 when she won this event a year ago.

After catching Nocera, Hull won in the playoff after hitting her tee shot to 4 feet and making the putt. Hull roared on to the international stage at the Solheim Cup last year, defeating Paula Creamer in singles while helping the Europeans to their first victory on American soil in that event. Hull famously asked Creamer for an autograph after beating her.