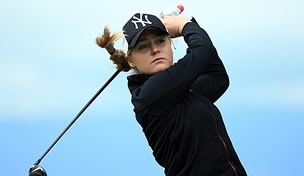 Getty Images
PONTE VEDRA BEACH, FL - MAY 13: David Toms looks on from the fifth hole during the second round of THE PLAYERS Championship held at THE PLAYERS Stadium course at TPC Sawgrass on May 13, 2011 in Ponte Vedra Beach, Florida. (Photo by Streeter Lecka/Getty Images)  -

Charley Hull’s smashing debut at the Solheim Cup has led to an audible in her bid to win LPGA membership.

Hull, the 17-year-old English sensation whose performance and personality won over American galleries in Europe’s upset of the United States in Denver during last month’s Solheim Cup, has canceled plans to attend LPGA Qualifying School’s second stage Oct. 8-11 in Venice, Fla. Instead, Hull has set her sights on earning LPGA membership next year through play on sponsor invites and other qualifying avenues.

“We applied for (Q-School) pre-Solheim Cup, never thinking the [sponsor] invitation route would get her enough starts,” Joe McQuade, Hull’s manager, wrote in an email to GolfChannel.com. “Post-Solheim, we sat down and had a good think about things and decided that as Charley is so young, she wouldn’t want to be in the States and away from home for her entire schedule, and that her exposure through the Solheim will hopefully have given her sufficient publicity to attract the maximum six invitations. These, together with competitions such as the U.S. Open, etc., that she can qualify for, will give her a nice balance between USA and European events. Whilst I know Charley is drawn to the States, she still wants to give support to the European (t)our, which is where her professional career began.”

Hull can earn LPGA membership next year by winning an LPGA event or by earning a non-member’s equivalent of top-40 money winnings by season’s end. Only money won in official events with a cut counts toward “equivalent” money winnings for non-members.

Hull could get into 10 or more LPGA events next year.

Hull made a strong impression upsetting Paula Creamer in Solheim Cup's singles matches and then asking Creamer for an autograph afterward. Hull was 2-1 in the matches. She is playing the Lacoste Ladies Open in France this week. She has five second-place finishes in her Ladies European Tour rookie season. She’s ninth on the LET’s Order of Merit.