Stricker takes charge with 63 at Kapalua 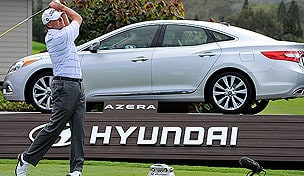 On the heels of a second-round, 10-under 63, Steve Stricker has a five-shot lead at the halfway mark of the Hyundai Tournament of Champions.

The Wisconsin native leads Webb Simpson in search of his first victory at the winners-only event in Kapalua, Hawaii.

Simpson, who carded a 68, birdied three of the last four holes to grab second place after 36 holes.

Las Vegas winner Kevin Na shot a 9-under 64 to grab third place. Eagles on the final two holes led to a back-nine 29, which has him in position for his second PGA Tour title.

Bay Hill winner Martin Laird tied for fourth on 8 under despite a double bogey at the 17th hole. Defending champion Jonathan Byrd shares fourth place after a Saturday 71.

The third-best round of the day belonged to sophomore Chris Kirk, whose 66 has him in a share of seventh place along with PGA champion Keegan Bradley and Bryce Molder.