In with the old: DJ re-hires former caddie Brown 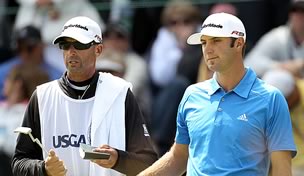 The caddie carousel returned to a familiar position for one high-profile player on Tuesday. Dustin Johnson announced via his management team that he had reunited with former caddie Bobby Brown.

Johnson and Brown split in April following an eventful year that featured four PGA Tour titles and high-profile missteps at the 2010 PGA Championship and this year’s Northern Trust Open.

“I am really excited to have Bobby back on the bag,” Johnson said. “He and I have always been tight and I appreciate his work ethic. At the end of the day, it’s about results, and four of my five wins came with Bobby at my side. We’re both expecting big things in 2012.”

At last month’s Presidents Cup Johnson had Keith Sbarbaro, an equipment representative with TaylorMade-Adidas, on his bag.

Johnson had surgery on Nov. 29 to repair cartilage damage in his right knee and according to his manager with Hambric Sports Management he is hoping to be ready for the season opener in Hawaii.

“Dustin’s recovery is going very well, and he remains hopeful of playing at Kapalua,” David Winkle with Hambric Sports said via e-mail. “I’m sure it will be a ‘game-time decision,’ but he remains optimistic.”