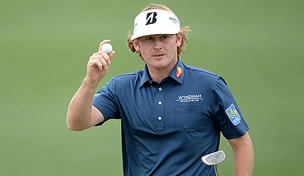 The Australian PGA Championship lost one of its main draws Tuesday when former FedEx Cup champion Brandt Snedeker was forced to withdraw from this week's event in Queensland due to a knee injury.

Details on how the injury arose were not immediately available. Snedeker made his 2013-14 season debut last week in China at the WGC-HSBC Champions, where he tied for 55th, but did not board a flight from Shanghai to Brisbane on Monday.

“The most important thing is of course Brandt’s health,” said Brian Thorburn, chief executive officer of the PGA of Australia. 'Brandt is a player who is held in very high regard wherever he goes, and while we're obviously disappointed he won't be playing this week, our thoughts are with him and we wish him a speedy recovery.'

At No. 9 in the latest world rankings, Snedeker was one of two players inside the top 10 set to tee it up this week at Royal Pines Resort, along with world No. 2 and reigning Masters champion Adam Scott. His next scheduled start will be Dec. 5-8 at the Northwestern Mutual World Challenge.