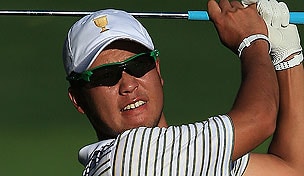 DUBLIN, Ohio – Presidents Cup rookie Hideki Matsuyama rode the coattails of his major championship partner much of the day, but he proved his mettle with clutch play late in the match to help claim a half-point for the Internationals.

With Masters champion Adam Scott at his side, Matsuyama carved an 8-iron from 169 yards to about 2 feet to win the 18th hole and halve the match with Webb Simpson and Bill Haas. He also birdied the 16th to square the match.

Matsuyama isn’t a household name in the United States, but he made a name for himself internationally winning three times on the Japan Golf Tour. He also showed well in the majors, tying for 10th at the U.S. Open and tying for sixth at the British Open.

“I really wanted the kid to get a win in his first match,” Scott said. “I got a win in a nail-biter with Ernie in my first-ever match, and I still remember it today. I wanted something good to happen for him. We didn’t win but he got an incredible way to finish out and get a half-point.”

Scott was terrific, making six birdies and an eagle. He holed out a flop shot for eagle to win the 15th hole.

“I was really nervous today, but playing with Adam helped me out,” Matsuyama said through an interpreter. “To get a half-point, I was really happy.”

Scott and Matsuyama were 2 down with four holes to play.

“Bill and Webb played beautifully,” Scott said. “It’s some of the best golf I’ve seen in any match I’ve played.