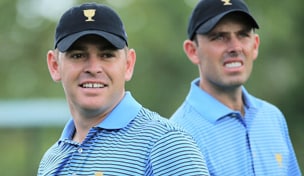 DUBLIN, Ohio – You’ve heard of playoff beards? That’s what a group of players from the International side at this week’s Presidents Cup were thinking. Well, sort of.

The plan was to have a barber come to the International team room Monday night, but after Louis Oosthuizen and Charl Schwartzel went first the rest of the team passed on the clippers.

“It didn't work out as well as we thought,” said Oosthuizen, his head shaven nearly bald. “Walking into the team room last night, the two of us, we looked like we came straight out of the army. So it was a lot of fun, and this morning, waking up and looking at each other, you know, we just laughed.”

Six players planned to get haircuts, but after the failed experiment with the two South Africans the rest of the team politely declined their turn in the chair.

“I saw he shaved the right side (of Oosthuizen’s head), and I thought it's a little bit of a dicey one coming in,” Branden Grace laughed. “I thought I would rather give a skip for this one today. I tell you what, we really had a laugh at them at the dinner.”