Internationals have the hot hand heading into Day Two 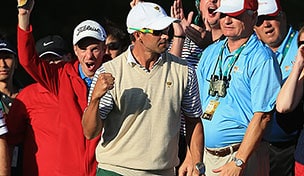 DUBLIN, Ohio – So who takes the hottest hand into Day Two of the Presidents Cup?

Surprisingly, that would be a pair of Internationals, who trail 3 ½ to 2 ½ going into Friday foursomes.

Masters’ champ Adam Scott and Presidents Cup rookie Brendon De Jonge delivered more sub-par scores on holes than any other players in Thursday’s fourballs at Muirfield Village Golf Club. De Jonge made eight birdies in his best-ball partnership with Ernie Els in a losing effort. Nobody made more birdies on Thursday, though de Jonge and Els lost their match to Steve Stricker/Jordan Spieth.

Adam Scott was 8 under on his card with six birdies and an eagle.

Brandt Snedeker and Bill Haas made the most birdies on the American side, each delivering seven birdies.

Els raved about the Presidents Cup debut of de Jonge, 33, whose resume isn’t as decorated as most players in this competition. De Jonge hasn’t won a PGA Tour event in his six seasons on the PGA Tour. He’s No. 63 in the world rankings, the lowest among the 24 players in this event.

“Brendon is so solid,” Els said. “I played with him for the first time in Boston in the FedEx Cup race. I was so impressed with his ball striking, and he has such a good head on his shoulders. He’s a wonderful player and a great partner.”

De Jonge and Els will be paired again in Friday foursomes in the second match off against Bill Haas and Hunter Mahan.