Is this U.S. Open over after two rounds? 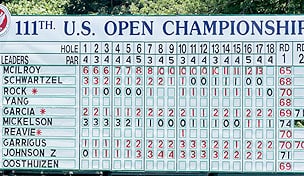 After scores of 65-66, Rory McIlroy stands at 11 under par and holds a six-shot lead through two rounds of the U.S. Open. Is the tournament over? Rex Hoggard and Jay Coffin weigh in with their opinions.

BETHESDA, Md. – One can envision some hapless, and eternally optimistic, golf scribe penning a similar tome way back in 2000 hard on the shores of Stillwater Cove. “It’s not over,” the wretch would begin, sure Tiger Woods would cool on his way to history at the U.S. Open. He would have been wrong.

But this isn’t Pebble Beach and Rory McIlroy, for all his 36-hole brilliance and natural appeal, isn’t Woods. And this isn’t over, not by a long shot.

Despite McIlroy’s rounds of 65-66, heady and historic stuff, there is still that final-round 80 at Augusta National, not to mention a second-round 80 last year that bounced him out of the lead at St. Andrews, looming like an unanswered question.

When Woods made the championship turn at the 2000 national championship he was a half dozen clear of the field and no other player managed a round better than 68 the rest of the way. He also was 19 PGA Tour victories and two majors into his career, that’s 18 and two more, respectively, than what the young Northern Irishman currently has on his resume.

McIlroy has been nothing short of brilliant through 36 at Congressional, but as the 22-year-old is learning it’s the last 36 that matter the most.

BETHESDA, Md. – It’s not over in the literal sense, but yes, it’s over in every other sense. Rory McIlroy will easily win this U.S. Open.

It’s easy to look at the final-round 80 at the Masters this year and the second-round 80 at the British Open last year. I throw out the 80 at the Old Course because that was in the second round (no real pressure) and the conditions on that day were less than ideal. The 80 at Augusta National is a concern but his lead now is larger than it was then.

The reasoning here is as much about his closest pursuers as it is his six-shot lead. Y.E. Yang is the closest but he has been too inconsistent here for two days to make you think he'll suddenly get hot. Robert Garrigus doesn’t fit that bill of a major champion and Sergio Garcia’s putter will keep him from contending. Zach Johnson, Matt Kuchar and Brandt Snedeker have major ability, but they're all nine shots behind McIlroy. Remember, it’s more difficult to make birdies and close ground at a U.S. Open than it is the Masters.

If you took McIlroy out of the mix, what score would win? Probably 3 or 4 under par. McIlroy’s swing is too sound right now, he isn’t going to shoot 8 over in the next 36 holes. If he does, it still may be good enough to win.