Island green 17th a little devil for Am Tour participants 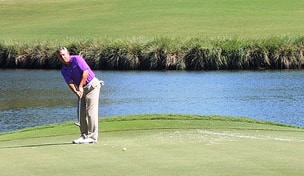 PONTE VEDRA BEACH, Fla. – At its longest, Pete and Alice Dye's famous par-3 17th on the Stadium Course at TPC Sawgrass plays around 135 yards or so. For many golfers it's the most difficult short shot they'll ever hit, simply because of the intimidation factor.

It actually isn't that hard, at least according to the statistics of Tuesday's round in the Palmer Flight of the Golf Channel Am Tour Championships. There were 10 birdies on the hole, 22 pars, 20 bogeys and 26 other scores on the hole. It played 1.07 above par, which made it the fifth easiest hole on the course for the group, whose handicaps are between 4.0 and 7.9.

Still, there's something about standing on the tee, knowing that if you miss the green, you're probably headed to the drop area, looking at double bogey or worse.

'It's a big green,' said Chuck Malik of Cary, Ill., who hit it to 12 feet and made par on Tuesday en route to 81. 'If you just remind yourself of that and look at the land instead of the waves, you should be alright.'

Butch Taylor didn't think he was nervous when he set up on the 17th tee, but then he realized he didn't start breathing again until his ball was safely on the green.

John Todd, who was looking to maintain a good round on Tuesday, hit a solid shot on the green, and then had to make a 6-foot comebacker for par. As he exited the green, he simply said, 'Man, I'm glad to have that hole behind me.'

Mike Holland, from nearby Fruit Cove, Fla., wasn't so lucky. He hit a 9-iron in attempt to reach the back pin position. 'It looked real good in the air,' he said. 'Then the wind got ahold of it and it went over the green.'

Translation: double-bogey 5 on his way to 85.

Eric Newsome of Land O' Lakes, Fla., just outside of Tampa, recorded one of the day's birdies, but it wasn't because of his tee shot. He hit an easy 8-iron that found the front part of the green, 30 feet from the pin.

'I just wanted to get it close and get out with a par,' said Newsome, who shot 82 on Tuesday, 'and [the putt] just happened to go in.'

Newsome followed with a double bogey on 18. The birdie on the previous hole made the finish a little less painful.