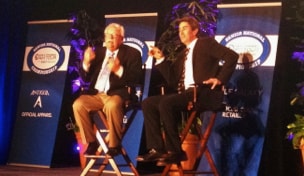 Getty Images
TURNBERRY, SCOTLAND - JULY 16: Anna Cladakis walks with John Daly of USA during round one of the 138th Open Championship on the Ailsa Course, Turnberry Golf Club on July 16, 2009 in Turnberry, Scotland. (Photo by Stuart Franklin/Getty Images)  -

LA QUINTA, Calif. – Roger Maltbie slipped slightly walking up the stairs to the stage to speak to the participants of the Golf Channel Amateur Tour Senior National Championship during Friday night’s welcome dinner at the La Quinta Resort and Club. A wisecrack followed: “This is the senior amateur, right?” Maltbie joked.

Maltbie, a five-time winner on the PGA TOUR and popular on-course reporter, admitted to co-host Terry Gannon that in no way could he keep up with the bawdy humor of David Feherty, but he did reference “swinger’s tents” and stories from his days as a pitch man for Michelob in entertaining the crowd. “There is truth in advertising,” he said.

The tournament kicks off today on the four courses at PGA West. It ends Tuesday by crowning winners in six divisions determined by handicaps for players age 50 and up. After a week of milder temperatures, the local forecast indicates the desert heat will return to the mid- to high-90s over the next few days. The pressure cooker that is a national championship will provide plenty of heat as well.

Maltbie offered some advice to those getting ready to compete.

“Golf isn’t that hard,” he said. Many of the players in the audience scoffed out loud until Maltbie told them to wait for the punch-line: “Until you start to care.”

You can bet everybody in the room cares about how they play this week. Not only is there a good piece of crystal on the line and the leaderboards appear on The Golf Channel every night, there are some serious bragging rights at stake.