No surprise why Fowler 'peaking' at Dove Mountain 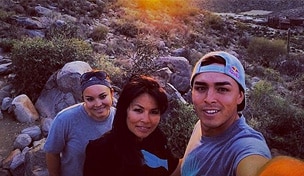 Getty Images
Cal Poly women's golfer Lucy Robson dresses up as a cat for Halloween in 2015.  -

MARANA, Ariz. – Rickie Fowler calls it more of a routine than superstition, but the distinction may be lost on a sports psychologist.

Each night since he arrived at Dove Mountain earlier this week Fowler has spent his evenings climbing a rugged hill adjacent to the Ritz-Carlton where he is staying. It’s a hike that takes about 15 minutes and seems to be more of a chance to unwind than exercise.

“It’s a good little workout. It will get you sweating,” said Fowler, who beat Jim Furyk, 1 up, in his quarterfinal match and will play Jason Day in Sunday’s semifinal round. “I guess it’s been working.”

Fowler tweeted a picture of himself and his mother and sister from atop the hill at sunset on Friday and said he plans to make the same climb on Saturday. Just don’t call it a superstition.

“Yes and no,” he said when asked if he was a superstitious person. “If it’s working might as well keep doing it. But it’s more of a routine than a superstition.”