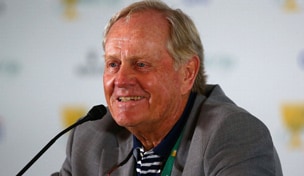 Getty Images
Tiger Woods shot 18-under 270 for a two-stroke win over Chris DiMarco, dedicating the victory to his late father. (Getty Images)  -

DUBLIN, Ohio – As if Jack Nicklaus, who was introduced Tuesday in a news conference as “quasi-host” of the Presidents Cup, doesn’t have enough to keep him busy this week, he’ll also be dropping the puck at Friday’s home opener for the hometown Columbus Blue Jackets.

Not that he’s sure what it will entail.

“They play Calgary on Friday night and that's the opening of the season and they have asked me to come down and do that and I'm delighted to do so. I need to learn something; I need to broaden my horizons.”

Nicklaus admitted that while he had season tickets for the Florida Panthers for five years, he only attended one game.

“They were playing for the Stanley Cup and they were playing against the Avalanche and that's when they were throwing the mice or the rats on the ice. And Wayne Huizenga owned the Panthers at the time and asked me if I wanted to come down with Barbara and we did. We went down, sat right behind the glass. Of course, every time the puck hit the glass, Barbara was jumping back about ten feet; or somebody would check into the glass.