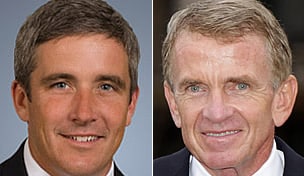 When he signed a four-year contract extension that would keep him in the role of PGA Tour commissioner until June, 2016 – when he’d be 69 years old and in his 22nd year on the job – Tim Finchem didn’t mix messages regarding his future beyond that point.

"I never rule out any possibilities," he said at the time. "But the likelihood is this will probably be it for me. There's other things I want to do."

In a move that cleared a path toward those other things and Finchem’s inevitable retirement, Jay Monahan, previously CMO and executive vice president, was named deputy commissioner on Tuesday, the first step in transitioning to the next phase by publicly recognizing a successor.

What does it all mean? This move should signify business as usual for the PGA Tour. By not seeking its next commissioner from outside Ponte Vedra Beach headquarters, the organization is following the blueprint recently laid out by the NBA, where Adam Silver took over for outgoing David Stern last month after serving in the same role that Monahan, 43, will now have.

All of which should be considered good news.

It would be premature to start ticking off Finchem’s entire list of accomplishments over the past two decades, but here are a few noteworthy ones: He negotiated three television contracts, including the current 15-year deal; he successfully navigated choppy waters during the economic recession, actually adding sponsorships when most corporations were reticent to forge such relationships; he implemented a mandatory drug testing policy in a game in which many believed it was unnecessary; and he oversaw an increase in purses of nearly 400 percent, from $56.4 million in 1994 to what will be in the neighborhood of $280 million this year.

For players who like their pockets lined with cash and fans who like their tournaments televised four days per week for 11 months out of the year, Finchem’s tenure has to be considered not only successful, but essential.

Tuesday’s news that such matters will be kept in house will only help to ensure these positive steps continue in the right direction. Not that there won’t be stumbling blocks along the way, but an unambiguous move to maintain the status quo should be considered a victory for all those who have a stake in the future of the PGA Tour’s business.