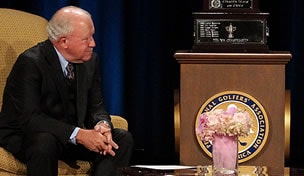 Longtime sportscaster Jim Huber died on Monday. He was 67.

After waking up with a cough on Christmas, Huber was hospitalized and diagnosed with acute leukemia on Dec. 28.

'The Turner Broadcasting family suffered a great loss and we are saddened by the passing of our colleague and friend, Jim Huber,' Turner Broadcasting's David Levy said in a statement. 'A terrific Emmy Award winning journalist and essayist, Jim made so many contributions during his more than 27 years with our company. He was a gentleman and wonderful individual and will be deeply missed. We send our condolences to his wife, Carol, and son, Matt.'

Huber spent a year at Presbyterian College in South Carolina in the early 1960s, then returned home to Ocala, Fla., where be became a stringer for the Ocala Star-Banner. He graduated from Central Florida Community College in 1964.

For the first decade of his career, Huber was a newspaper writer, working at the Tallahassee Democrat and Lakeland Ledger before covering team beats at the Miami News and Atlanta Journal.

In 2000, Huber moved to Turner Sports full-time and divided time between coverage of golf and the NBA. He brought his writing style to television as an essayist for Turner's golf coverage. Huber also contributed regularly to the PGA of America's website with a column called 'A Sense of Huber.'

Most recently, Huber completed a book entitled 'Four Days in July,' a recounting of Tom Watson's run at the 2009 British Championship. In 2001, he authored 'A Thousand Goodbyes' which shared his recollections of the final months of his father's life.