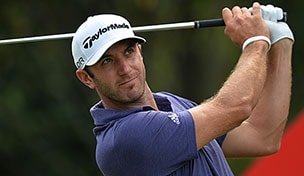 Looks like Dustin Johnson is doing more than sight-seeing and snapping Twitter photos with his fiancée in Shanghai, China. Johnson shot 9-under 63 Friday at Sheshan International Golf Club to take a five-stroke lead through two rounds of the WGC-HSBC Champions.

Here’s a look at where we stand entering weekend play in the fourth event on the 2013-14 PGA Tour schedule:

What it means:  DJ decided to show up again. He won the 2013 season-opening Hyundai Tournament of Champions and then took the rest of the year off with just five other top-10 finishes. This is Johnson's first event of the new season.

Round of the day: Johnson’s 63. He started the day four shots back of McIlroy, but thanks to 10 birdies and one bogey he’s now four clear. He was 6 under through his first seven holes Friday and 4 under over his final six.

Best of the rest: Weekley and Poulter each shot 5-under 67 to get into contention. While it was four strokes higher than Johnson's 63, it still tied for the second-lowest score on the day. Phil Mickelson had a 68 to reach 5 under.

Biggest disappointment:  A few candidates, but it has to go to McIlroy. Rory was three clear of the field at the turn, but shot 3-over 39 on the back nine – three bogeys, no birdies. Coming off an opening 65, McIlroy has still only posted back-to-back rounds in the 60s once this year.

Main storyline heading into Day 3: Can anyone catch Johnson? It’s only 36 holes, but Johnson has shown that when he’s motivated and playing well he is very difficult to beat. That appears to be the case again this week.

Quote of the day: “There’s still two more days of golf left. Just try and come out tomorrow and do the same thing I did today.” – Dustin Johnson