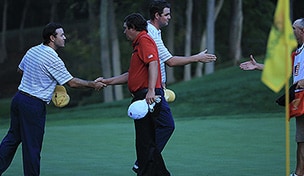 Getty Images
A Big Break Greenbrier cameraman makes sure to get a close up shot of Derek Bohlen.  -

DUBLIN, Ohio – With the U.S. reeling from an International onslaught that featured leads in all five of the final foursome matches on Saturday at the Presidents Cup, American captain Fred Couples received a surprising spark.

Richard Sterne and Marc Leishman were 2 up and cruising against Jason Dufner and Zach Johnson through seven holes before the American tandem ignited a rally by playing the final eight holes in 6 under and closing out the Internationals with a holed-out wedge for eagle at the par-5 15th hole.

“Being the lead group, you want to kind of set the tone and for us to be down a couple of holes, and then to come back and actually close the match out before darkness suspended play is pretty key,” Dufner said.

“It was the perfect number,” Johnson said. “The greens are so saturated that it was a half shot. It was one of those shots I could have got my 54-degree sand wedge there, but it would have spun a lot. So it was kind of just a chip wedge that took the spin off.”

Dufner and Johnson improved to 2-1-0 for the week with the victory.